Minecraft 1.19 for Android “Wild Update” is the version announced for Minecraft Live 2021. The update added a Guardian, Gloomy Depths, Allay and redesigned biomes.

Improved biomes and added variety. There are more variations of standard biomes in Minecraft.

A new forest biome. There is no additional information yet. The developers showed concept art: 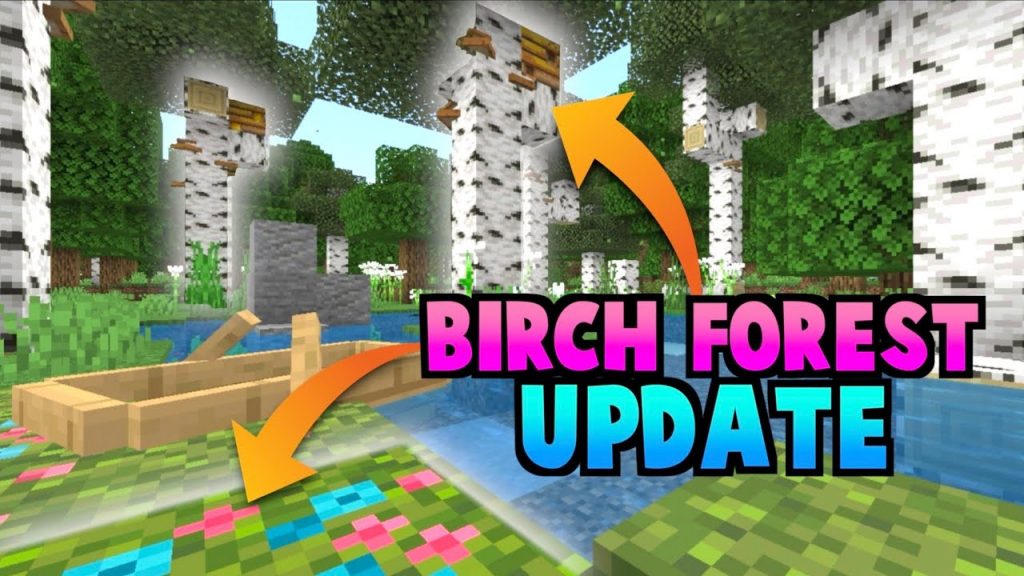 A new biome. Appears deep underground.
Experimental mode is required
The darkest biome
Generated from level Y=-1 to Y=-64
The surface is covered with skulk
The only single mob in the Biome – Warden
You can find Chests and Candles 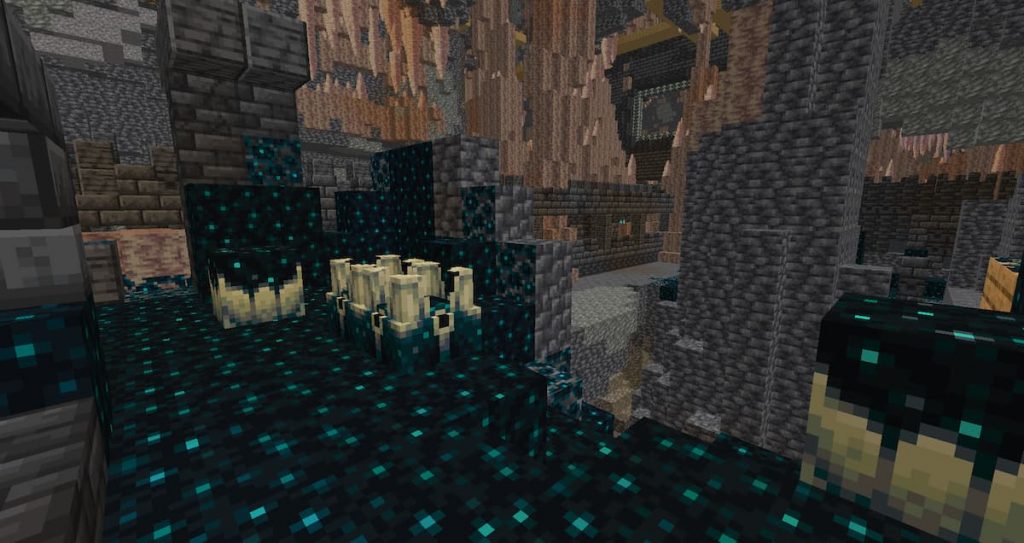 A structure in the Deep Dark. It is an abandoned city.

More detailed:
An extremely gloomy place
It resembles an infernal fortress
The Guardian will spawn
It consists of Basalt, Deep shale and Skulk blocks

Chests with useful things appear
Generated Soul Torches, books, Candles, Skeletal bones and more.
There are also echo shards
There is a trap in the city center 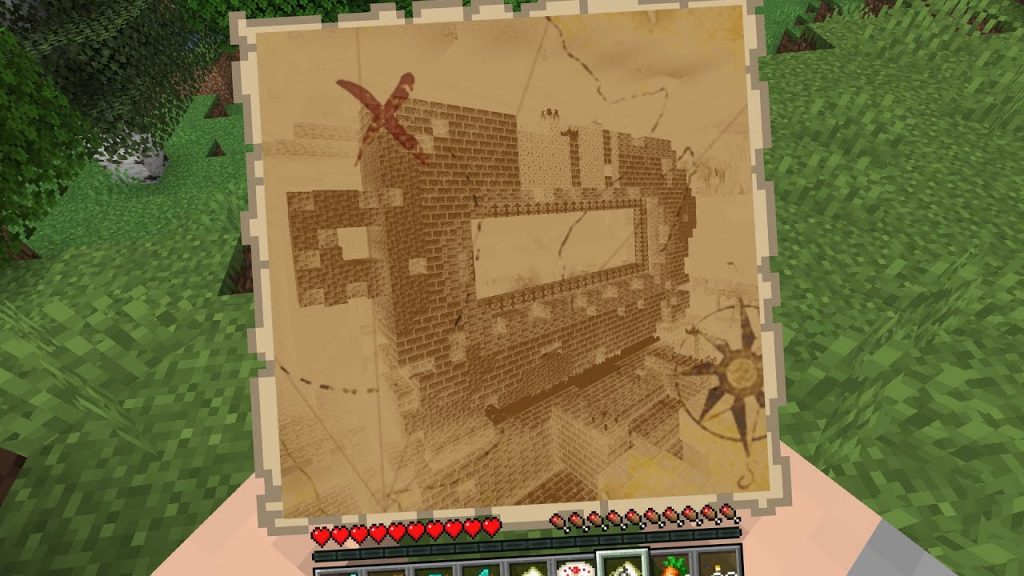 A variant of the swamp biome. Features:
Mangrove trees grow
The surface consists of dirt 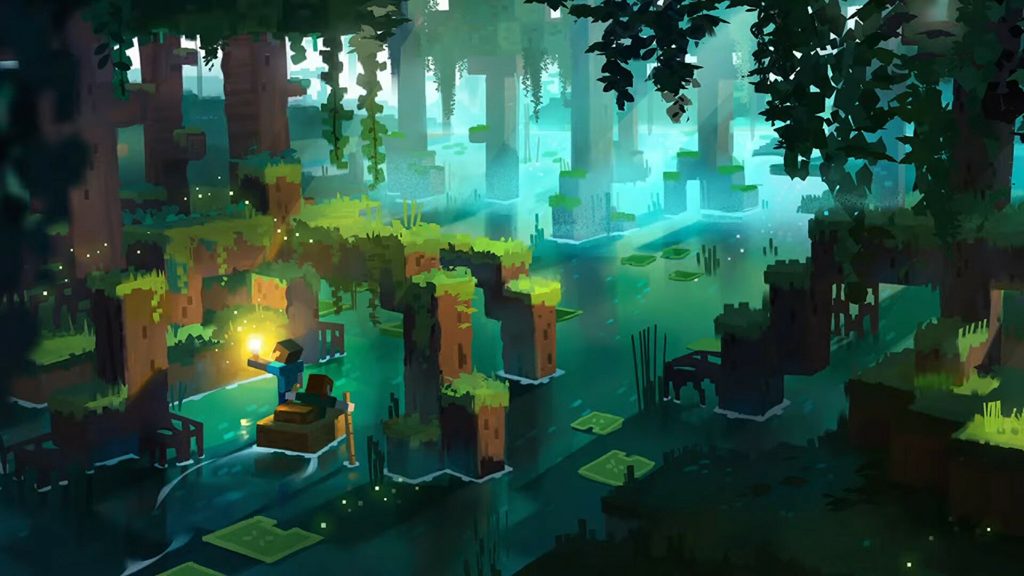 The basis of Mangrove biomes. Features:
It is created from a block of earth and a flask of water
It turns into Clay if placed over a pointed dripstone block with a growing Drip
Used to create Mud bricks
Mud brick is created from Mud, Sand and Wheat
Used for slabs, stairs, and walls 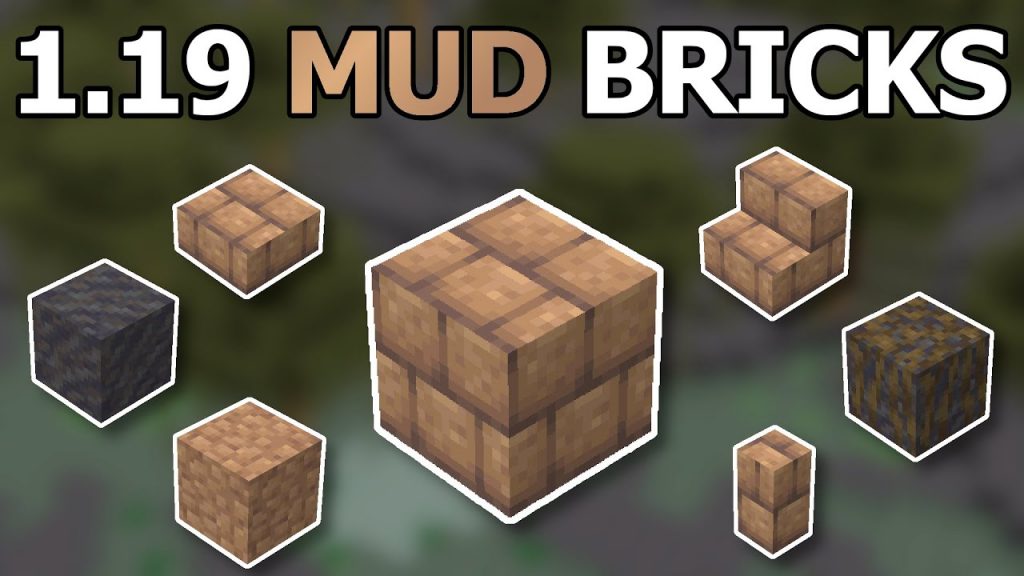 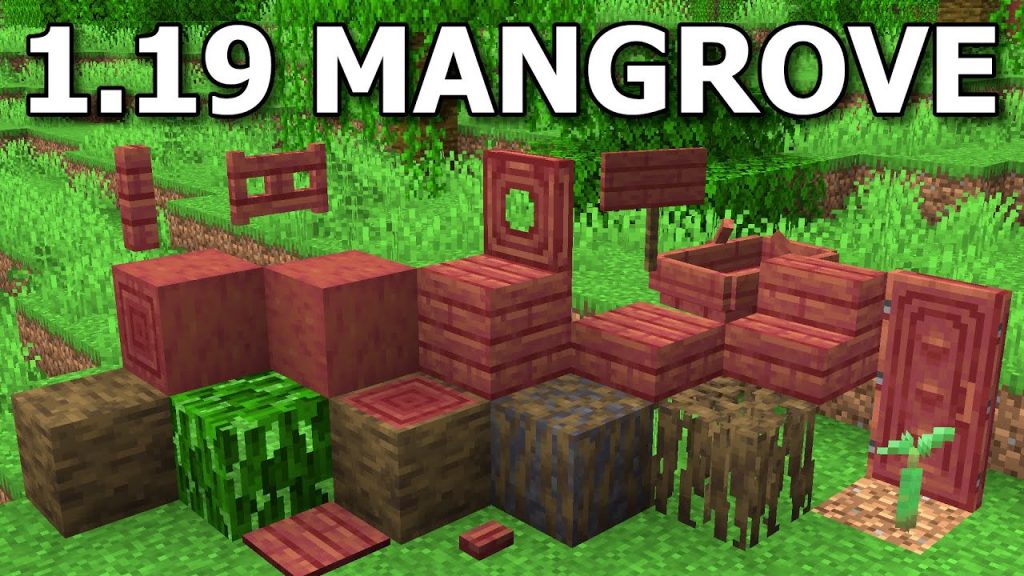 Generated in the Deep Dark. They have animations and drop experience when destroyed. All elements in the future will be associated with the Warden.

A block for the device of wireless circuits. Features:
Generated in the Deep Dark
Appears at the death of mobs next to the Sculk catalyst
Got animated textures

They appear in layers like Snow. Features:
Placed in all directions
The player will be able to see the block under the Sculk veins
It is used in wireless circuits

A mysterious block that emits souls. Features:
Activated when mobs die within a radius of 8 blocks
It is impossible to gain experience from the dead creatures nearby
A charge will appear at the place of the mob’s death
The charge passes through the Skulk Blocks and turns ordinary blocks into a Skulk shreiker
The strength of the charge depends on the amount of experience from the killed mob
1 charge power is spent on each transformation of the block
The charge disappears with time
The rate of disappearance depends on the distance to the Sculk-catalyst
If the charge disappears within a radius of 4 blocks from the Sculk-catalyst, it can turn into an Sculk sensor or a Sculk-shriker
Charges are combined when they meet

Emits creepy sounds when activated. Features:
Activated by an sculk sensor
Applies the effect of Darkness when activated
The Warden will spawn when turned on multiple times
Experience does not fall out
Emits rings when activated 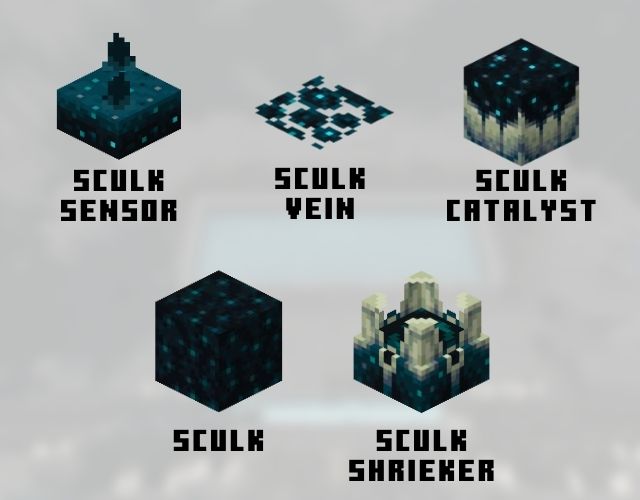 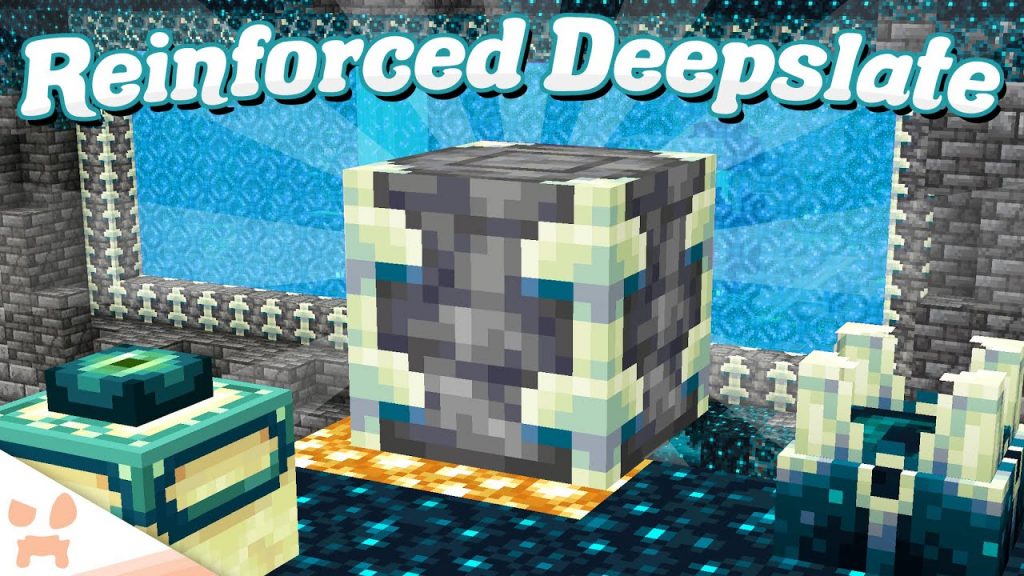 Tadpoles appear from it. You can’t get it in survival mode yet.
It appears when two Frogs reproduce
Hatches from 2 to 6 Tadpoles
It is placed on the surface of the water source
When destroyed, nothing falls out

It is known about 5 new mobs. Presented a description of each.

Looks like a minotaur. Reacts to sounds and feels your fear. To survive, you need to sneak.
Spawn in the Deep Dark biome
Applies the effect of Darkness every 6 seconds
Responds to vibrations
With weak vibrations, it uses a scent
Moves quietly
Has a sound attack
Deals damage from a distance
Push the target
Unnoticeable until he hears the victim
Waiting for the signal from the Scunk Shreiker to attack
The louder the footsteps, the angrier the mob
In case of strong anger , he stands opposite and growls before the attack
It goes away if you do not anger and do not get caught within 60 seconds
More than one launched projectile within 5 seconds angers the mob
Use projectiles only once every 5 seconds when collecting loot from Chests
Breaks Shields on impact
A scunk-catalyst falls out
It’s better to sneak around and not disturb than to fight
Heavy damage: up to 30 units per hit
Speed as a player
Has a glowing heart on his chest
Brightness depends on the environment
The heartbeat accelerates with an increase in anger
Has from 84 health units
Height: about 3.5 blocks 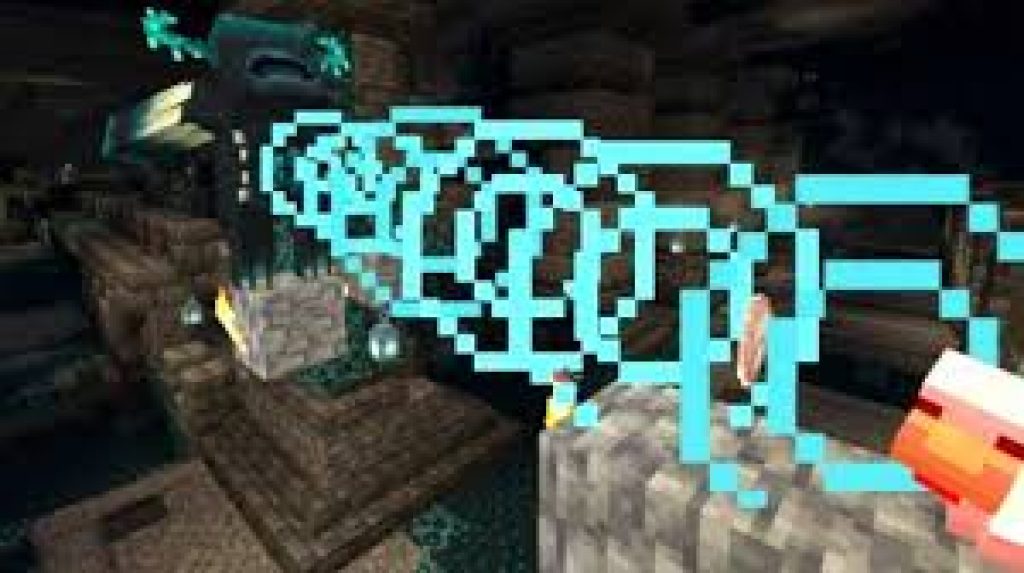 The new swamp mob. Features:
Spawns in Swamps
Jumps high, walks on land and croaks
It is lured and propagated by Sea grass
Lays eggs after reproduction
Tadpoles hatch from the Caviar
There are three types: white, green and brown
Eats small Slugs
At the same time, Mucus falls out 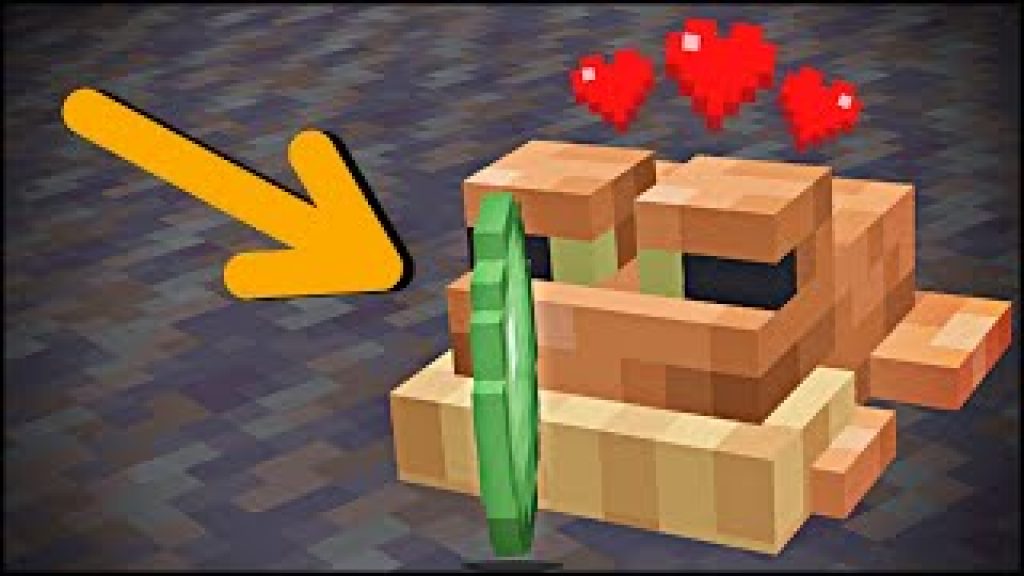 A Newborn Frog. Characteristics:
Hatch in any biome from Frog eggs
Do not appear naturally
Health: 3 hearts
Lives in water
Twitches on land like a fish and dies in a few seconds
Grows into a Frog
The species depends on the biome
You can catch it in a bucket 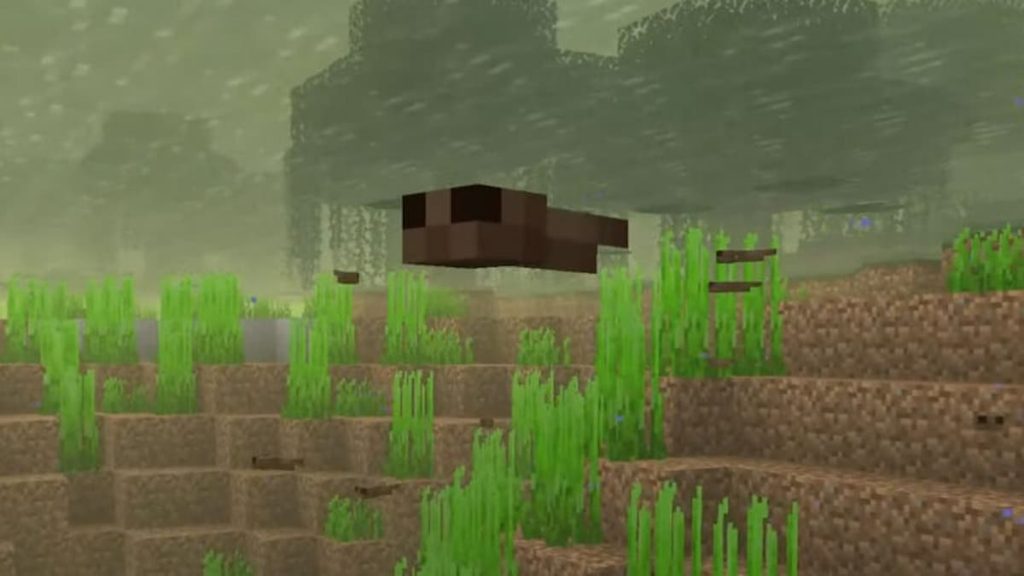 Frog and Tadpole are available in Experimental mode from version 1.18.10.24.

A tiny insect. Nothing is known about the interaction with the mob.
Will not appear in this version
The first two-dimensional mob 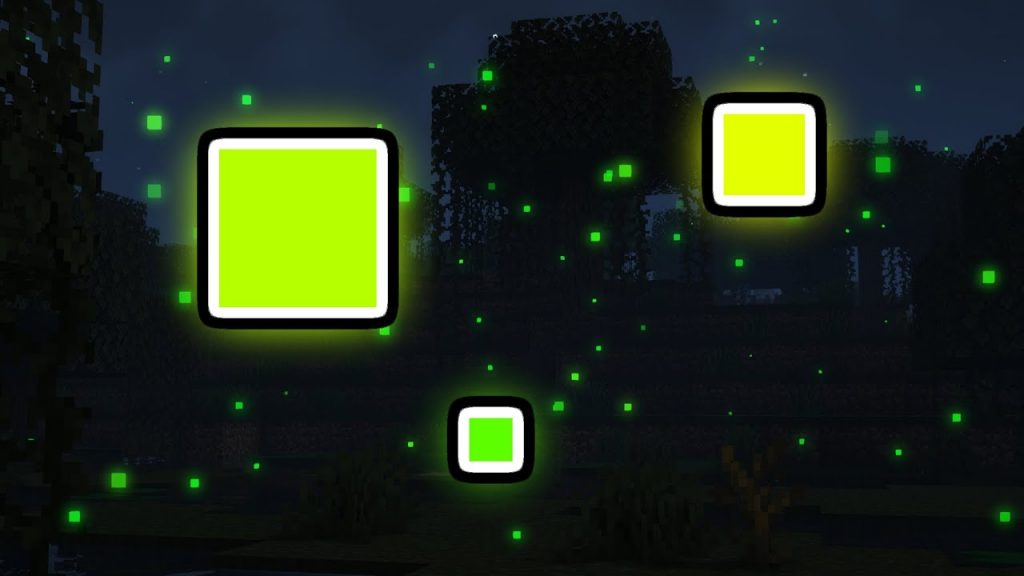 Flying mob. The winner of the vote on Minecraft Live 2021.
While appears when the Experimental mode is turned on
Glows in the dark
Picks up an object and looks for similar ones
Can leave the selected items next to the Music unit
Follows the user while holding an object from him
If a Music block starts playing nearby, the mob will leave items next to it for 30 seconds, and will not bring the player
The mob gives the player all the items from the inventory
Sometimes it spawns in cages near the Outpost of robbers and in a Forest mansion 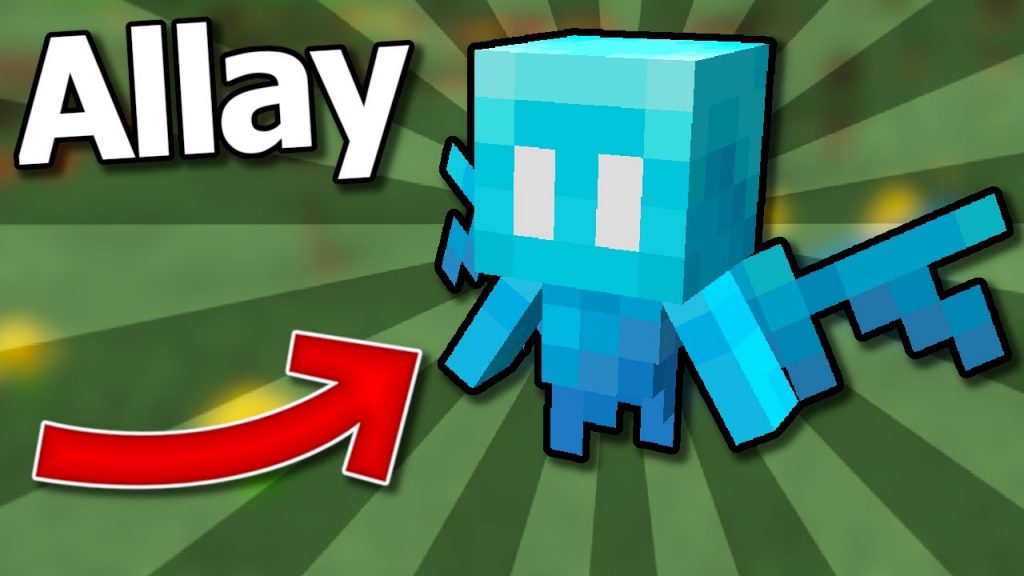 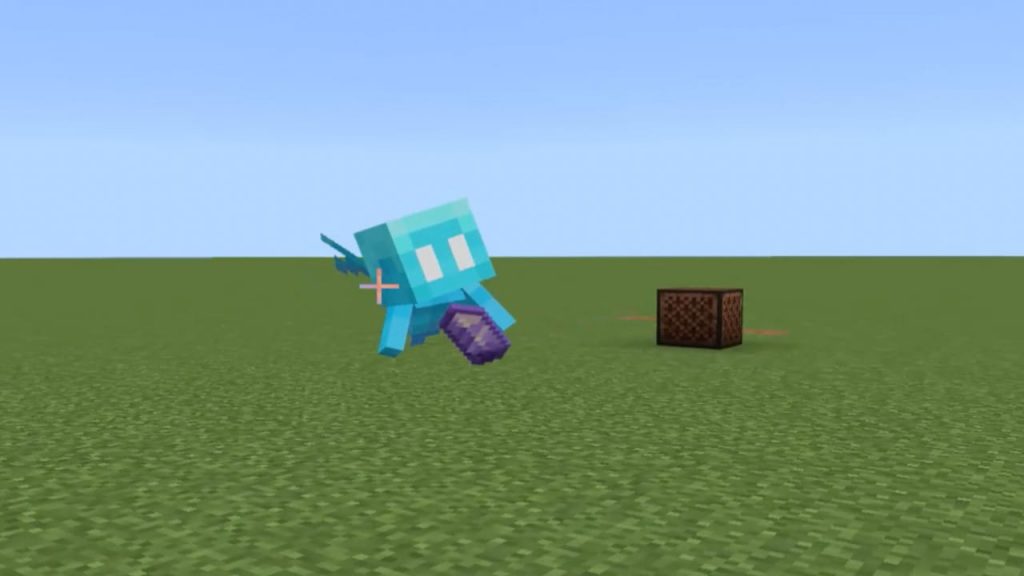 There is not much information about new items. Listed the famous ones.

Boat with a chest

New transport. It looks like an ordinary boat with a Chest on board.
Experimental mode is required
Works like a Trolley with a Chest
You can store things when traveling
To create, connect the Chest with the Boat 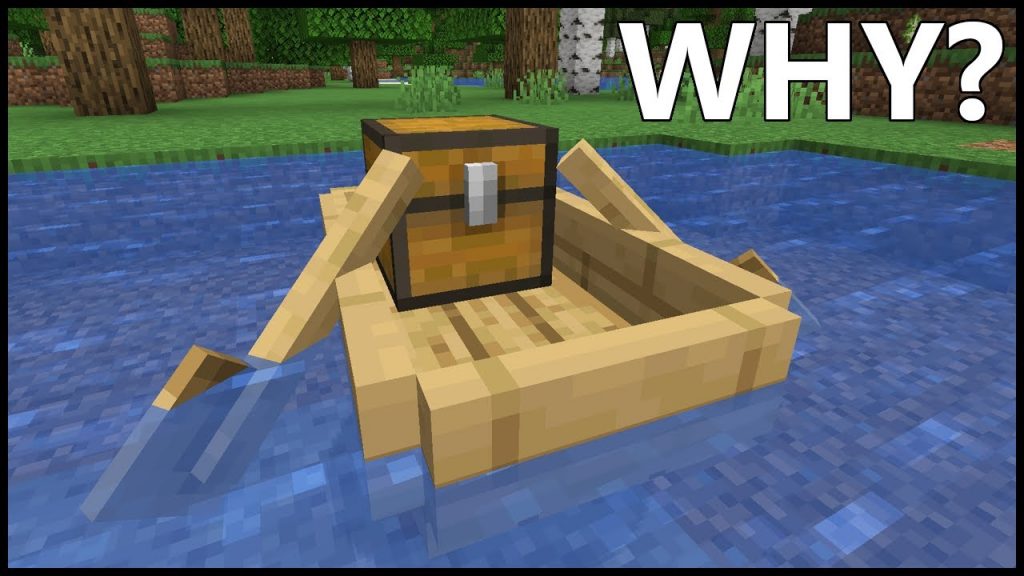 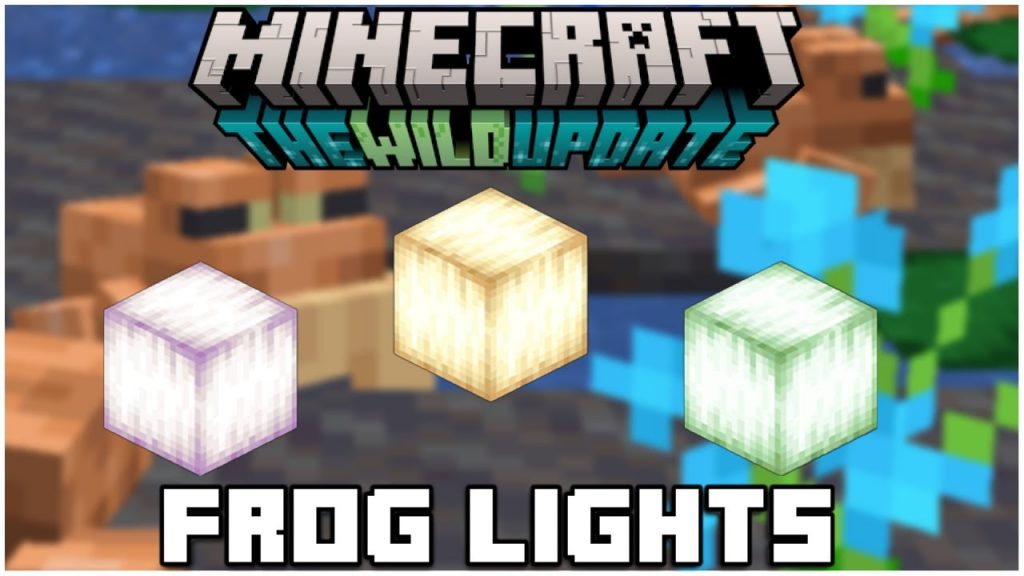 A new item for playing sounds. Features:
Will not appear in this version
When crafting from the Horn of a screaming goat, the sounds will be different
Appears in the Outlaw Outpost
Makes three sounds:
When looking up
When squatting
With any other action 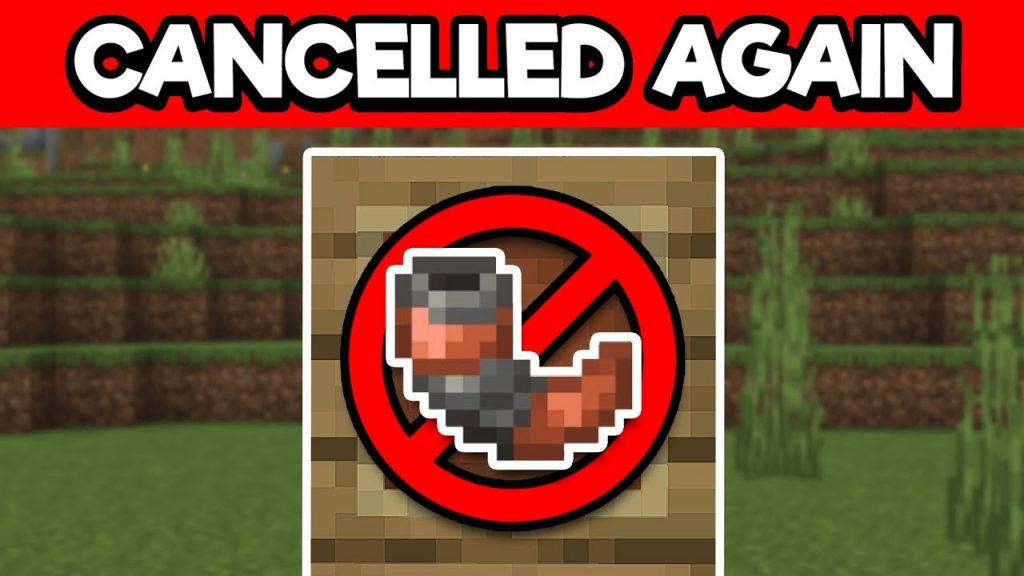 A new version of the compass. Indicates the player’s death point. Features:
When a player dies in another dimension, the arrow turns randomly
It is created from 1 Compass and 8 Echo Fragments
Echo Fragments appear in the Chests of the Ancient City 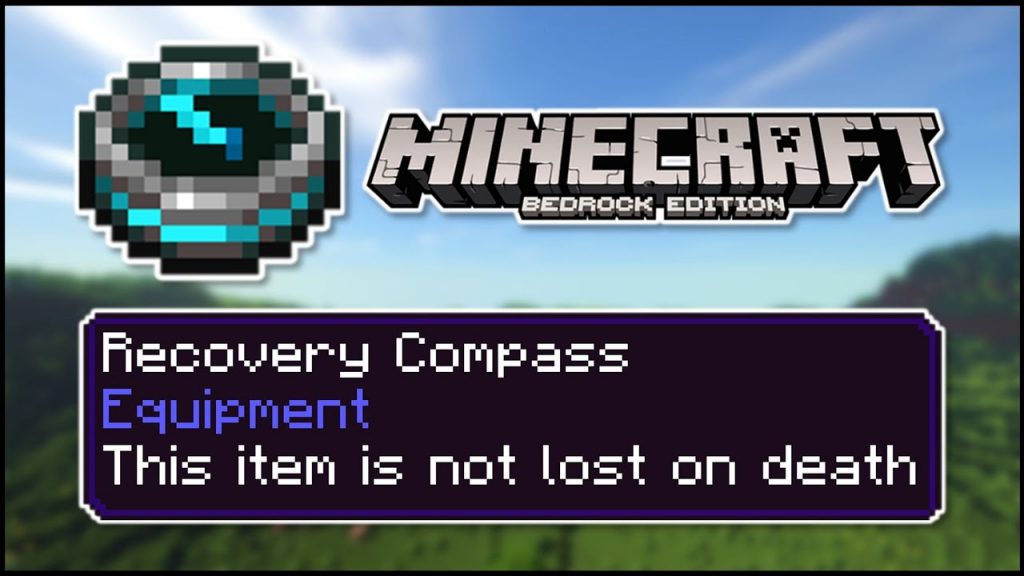 New music. Features:
It is created from 9 Fragments of the plate 5
Fragments rarely appear in the Chests of Ancient Cities 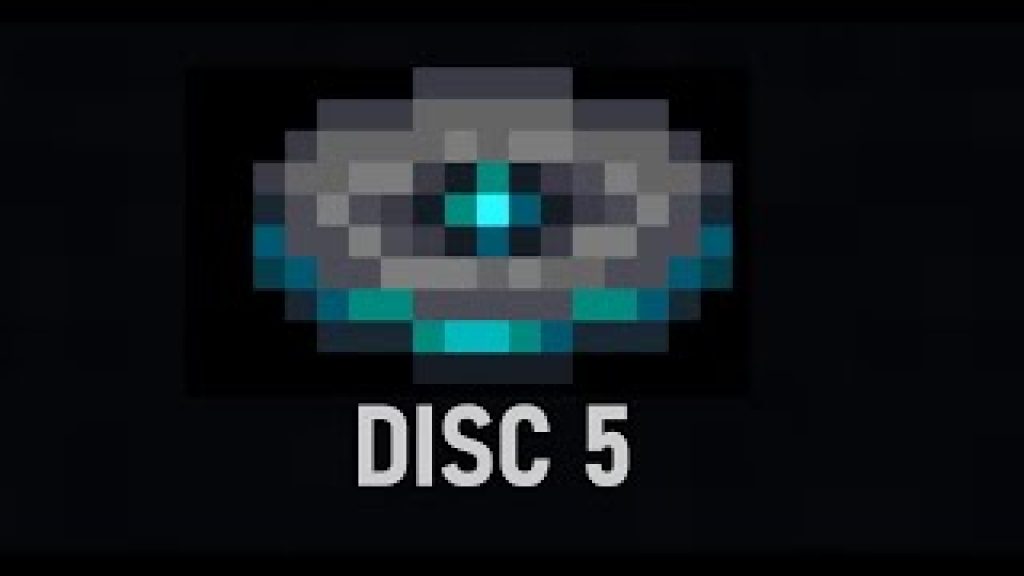 The effect of darkness

A unique effect for the Warden and the Sculk-Shriker.
Superimposed on players nearby
Lowers the brightness of the world
During pulsations, it almost drowns out light sources
For the player under this Torch effect, it will be incredibly important (especially when the Warden appears)
to demonstrate the effect of darkness and important moments 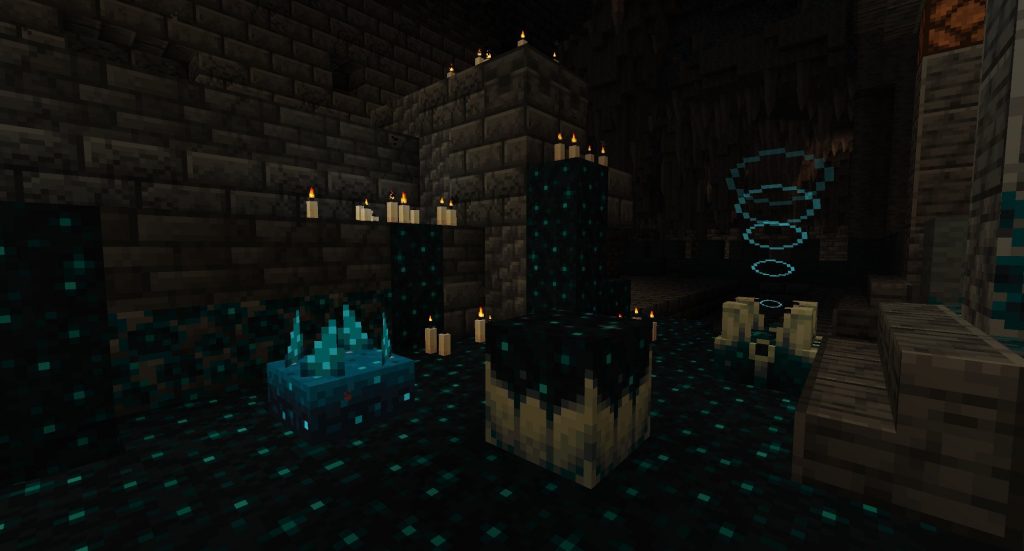 New experimental mode. More details:
Not allowed:
Build
Attack
Throw away and use things
Open inventory
Interact with Chests and other vaults
Use emotions
Go through portals
Flies and passes through blocks
Only the player’s head is drawn
You can breathe in water
When entering the mode, the player stops riding, using objects, sleeping or flying

Added 4 new achievements. More detailed:
It spreads — kill the mob next to the Sculk Catalyst
Birthday Song — let the Allay throw the Cake on the Music block
Together — collect all three Frog lamps in the inventory
Absolute elusiveness — sneak next to the Acoustic sensor so that it does not work 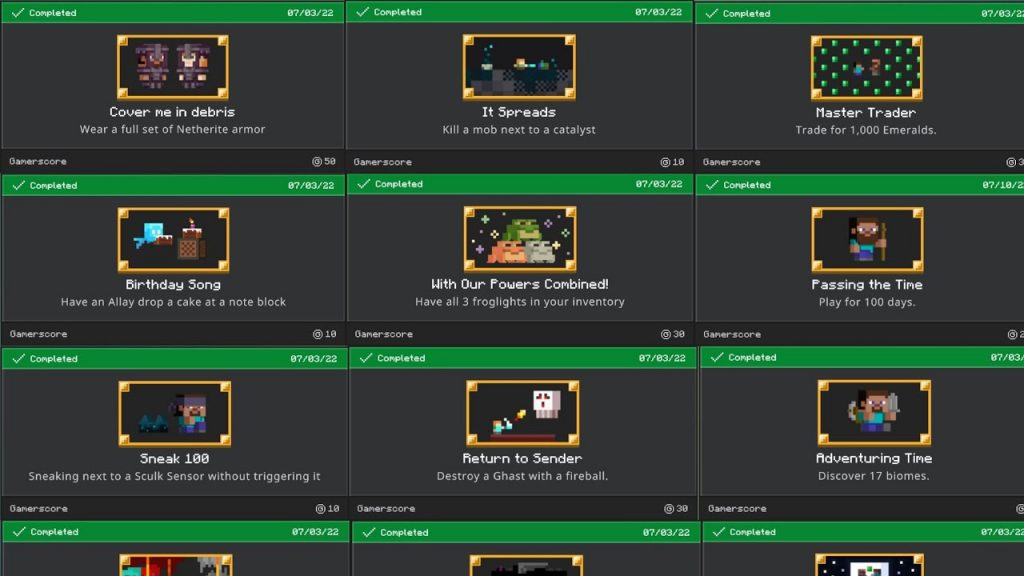 Search for biomes and structures

Postponed for an unknown period. Perhaps the functions will appear in version 1.20, but there is no official information about this. 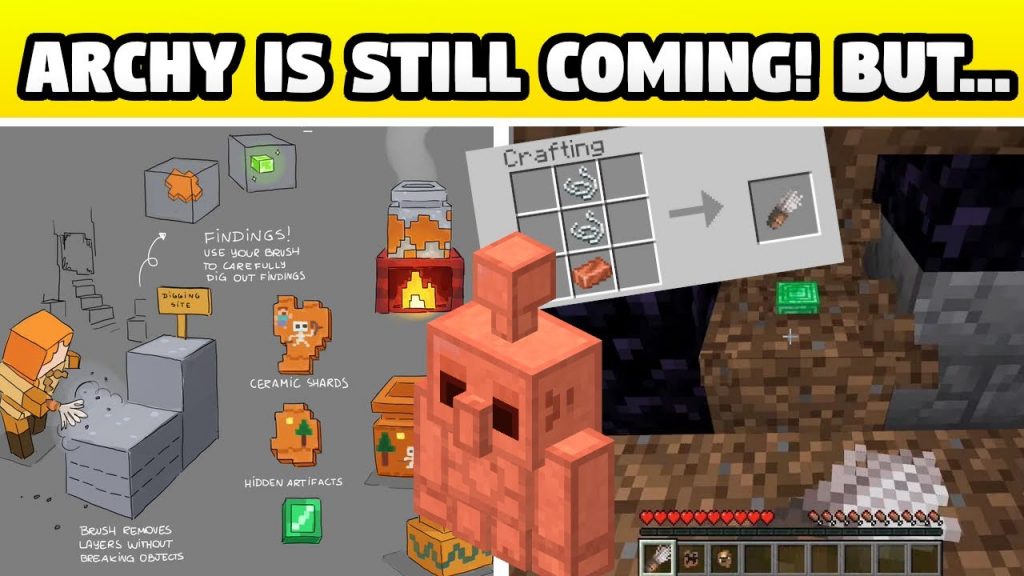