If you played the popular game Halo, then surely you will immediately recognize in this image its main character. So say, protaganist.
Now you can become this hero too. Skin Master Chief (Halo) for MCPE 1.2.0 is made very realistic and looks like the main officer from the same game.
Ever since his young years, John (his real name) was trained in a squad of Spartans, and offered to perform a dozen complex tasks. This hero was trained not only by the history of the detachment itself, but also
military strategy and teamwork. The physical training of the Spartans also received much attention.
The plot of the game during training and physical training, he strongly made friends with other guys, the Spartans, who recognized his authority and leadership.

The author of this skin did everything possible so that the players of the world of Minecraft PE. Adding this image to their world, recalled all the most exciting battles in which an officer named Master Chief participated. 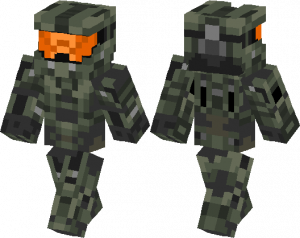 At the age of 14, the main character had to go through a terrible operation, but fortunately, everything went without consequences. And already becoming a mature and conscious Spartan, he became the first and only commander of the unit of Spartans and received the title of “Master Chief Sergeant.” Many years of study in the special detachments and divisions and deprivations were not in vain. Every mortal can envy his abilities and skills.
We suggest you download Master Chief (Halo) for MCPE 1.2.0 skin to your mobile devices, play with this image on your favorite multiplayer servers and improve the skills of the super hero.
The version of the game for this skin is MCPE 1.2.0.